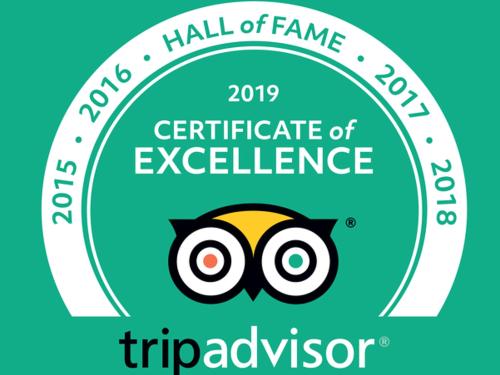 Boardwalk Boutique Hotel Aruba has been ranked the #2 best hotel in Aruba on TripAdvisor for six consecutive years and is the winner of the TripAdvisor Travelers' Choice Award in the category of Top 25 Hotels for Best Service in the Caribbean for four consecutive years.

Boardwalk Boutique Hotel Aruba is among the recipients of the 2019 Experts' Choice Award from . Based on more than one million reviews from 85 different publications, the award recognizes the best hotels around the world, with fewer than 2% of hotels worldwide receiving this award.

Travel writers and journalists of USA Today, National Geographic Traveler, and The New York Times, among others, named Boardwalk "Best Boutique Hotel in Aruba," "Best Hidden Gem in the Caribbean," and “Recommended Lodging” for its tropical surroundings, personalized service, and “warm, artful touch.” In December 2016, Boardwalk received Caribbean Journal's Readers' Choice Award for ranking #2 in the category of Best Boutique Hotels in the Caribbean.

Boardwalk received the 2017 Expert Travel Award based on excellent reviews from travel experts of Lonely Planet, Fodor's, and Frommer's. Additionally, Boardwalk Hotel received Booking.com's Guest Review Award in 2017 with a score of 9.2.

It was always Aruba’s best small hotel, and now the Palm Beach-area Boardwalk is officially a “boutique hotel.”

This is Aruba's Hottest Boutique Hotel! For years it was Aruba’s most beloved “small hotel,” a tiny oasis of 14 rooms just across from Palm Beach. Now, after a major transformation project, Aruba’s family-owned Boardwalk has officially relaunched as a full-fledged boutique hotel, the Boardwalk Boutique Hotel. The new Boardwalk has reopened its doors following a significant expansion project that resulted in 32 new “casitas” on the lush grounds of a former coconut plantation called Plantage Tromp.

Boardwalk made headlines in the news section of aruba’s destination website twice, announcing our transformation to Boutique Hotel.

This popular hotel is about to get a lot bigger. Aruba’s Boardwalk Small Hotel will soon debut the fruits of a major expansion project that will see the property rebranded as the Boardwalk Boutique Hotel.

The design and architecture of the new boutique hotel reflect the barefoot luxury guests have come to love at Boardwalk. Each charming new casita, with a seamless indoor-to-outdoor transition, features unique characteristics and a well-thought-out aesthetic.

The Aruba Tourism Authority’s website paid attention to Boardwalks’ reopening in November of 2019 in this article.

Toronto-based travel magazine Departful listed Boardwalk Small Hotel as "no better place to rest after island thrills" in a write-up on adventure in Aruba.

"I was so impressed with your operation, the beauty of the grounds, and the experience overall."

“If you want to be closer to t