Boardwalk Small Hotel Aruba has been ranked the #2 best hotel in Aruba on TripAdvisor for six consecutive years and is multiple winner of the Tripadvisor Travelers' Choice Award. The hotel guests as well as travel writers and journalists (amongst which are USA Today and The New York Times) have named Boardwalk the "Best Boutique Hotel in Aruba" and "Best hidden Gem in the Caribbean" for its tropical surroundings, personalized service and true local flavor.  In December 2016 Boardwalk ranked #2 of Best Boutique Hotels in the Caribbean, receiving the Readers Choice Award 2016 from Caribbean Journal. 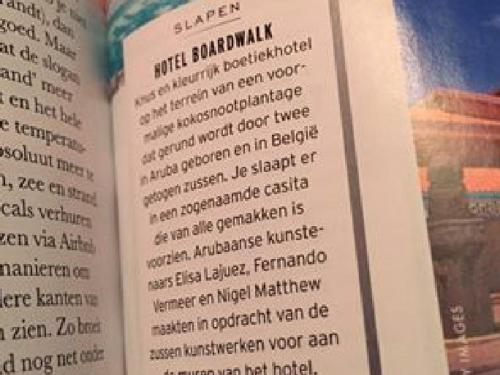 "BOARDWALK HOTEL - Twin sisters own and operate this boutique hotel located a short walk from Aruba’s white-sand Palm Beach. Their warm, artful touch shows up throughout the 14 casitas, from walls splashed in Caribbean colors to the glass pitcher of iced tea waiting in the fridge in the full kitchen. The sisters can also direct you to favorite local restaurants such as breakfast takeout spot Mi Boca Dushi. ORANJESTAD, ARUBA; FROM $185"

" Painted in sunny Caribbean colors, the 14 rooms at Boardwalk Hotel Aruba (boardwalkaruba.com) cluster around a lush garden with hammocks on the terraces; from $165." 36 hours in Aruba; The New York Times, November 2013"

"Speaking of romance, there's a hidden gem on this island known as Boardwalk. Run by charming Belgian-raised twins Stephanie and Kimberly Rooijakkers, and considered by many as the most romantic hotel in Aruba, this small, Caribbean-colored property is situated across from the famed Palm Beach. Boardwalk has been featured in The New York Times, USA Today and National Geographic Traveler. Its lush gardens, hammocks on terraces and champagne breakfasts delivered to your room make this a perfect oasis for couples, honeymooners or anyone wanting a peaceful, serene, truly intimate home base from which to explore the environs."

Located just steps from Palm Beach, this intimate 14-casita property is owned and operated by twin sisters Kimberly and Stephanie. The sisters’ attention to detail is evident in everything from the island-chic decor to the on-site amenities including “treasure boxes” of secret, locally-recommended restaurants and attractions to explore. All casitas are equipped with full kitchens, private patios, barbecues and hammocks. Read the article on Weddingbells.com

"Boardwalk Hotel Aruba: For those in search of a truly intimate boutique experience on Aruba, the Boardwalk Hotel is an excellent mid-range choice. This peaceful 14-room property, tucked behind three massive Marriott properties and situated on a former coconut plantation, remains an oasis of calm. Adventure sport seekers have called this their secret vacation home for years, but the property also appeals to couples and families. The bright, spacious rooms – more like apartments – have fully equipped kitchens, fine linens and private patios. Snorkel gear is provided free to guests, as are beach towels, coolers, chairs and umbrellas. There's no direct beach access, but guests can walk to nearby Palm Beach (full of bustling restaurants, casinos and nightlife) or get in the car and head to a hidden beach recommended by the owners – they know the local scoop, so guests should be sure to ask their advice."

"This small, romantic hotel is nestled in palm trees across the street from the beach. It’s an easy going resort that’s the kind of place you’ll honeymoon and then come back to for years to come."

"This charming, locally-owned group of Caribbean “casitas” is a world away from the larger properties typically found on the island."

"The Boardwalk is about value, and about going to Aruba and having a small hotel experience on an island that is dominated by large-scale resorts. It’s a place to escape the big hotel feel and find something that feels like home. In a short time, you’ll feel like a native."

Telegraaf - A renowned Dutch Newspaper features Boardwalk Small Hotel as one of Aruba's hot spots and recommended lodging on the island.

Boardwalk Small Hotel as one of Aruba's hotspots.

"Where to Stay - More of an intimate, boutique venue, Boardwalk Hotel Aruba features spacious rooms with fully equipped kitchens and private patios with charcoal grills. Built on the site of a former coconut plantation, the hotel has a luxurious garden with hammocks on the terraces. Rooms start at around $165 per night."

"For where to stay I also wanted something unique, authentic and special so I picked the Boardwalk Hotel in Aruba and instantly fell in love with the 14 colorful and cheerful casitas that are quietly tucked away in what use to be an old coconut plantation just a three minute walk from Palm Beach. Sisters Stephanie and Kimberly own this exceptional property and go above and beyond to make you feel at home with so many thoughtful touches".

"Head back towards Boardwalk’s rustling palm trees and guests can kick off their flip-flops and unwind in the same low-key way they always have. Each casita has a private porch, with a hammock and charcoal barbeque. “People know it’s a small hotel here, and they tend to talk to each other more, ” says Stephanie, referring to the friendly atmosphere of the hidden gem." To read the full Oyster investigation of Boardwalk Small Hotel Aruba, click here

"BOUTIQUE WITH A HEART. Boutique resorts are the growing segment of hospitality on the island and leading the way is the Boardwalk Small Hotel. It has been a leader in this niche market since its inception. It made the news this week when it launched its Treasure Box, placed in each of the 14 totally cute casitas, containing 10 small cards with information and directions to must-visit places, hotspots and hidden gems such as lesser known local eateries and beautiful viewpoints on the island, offered to all guests as an in-room amenity. Owners Kimberly & Stephanie Rooijakkers continuously find ways to distinguish themselves from the rest which mostly takes investment and heart. Take a look at their totally out-of-the-box website. It looks fabu and it’s amazingly interactive. Just like their big neighbor across the street, they get big guns to help them develops their biz with a buzz, including an imaginative Floridian photographer, excellent in-room art, Eliza Lejuez, and the island’s top PR and marketing professional Karin Swiers. As summed up by Ronella Tjin Asjoe, ATA’s CEO: A great product, well-kept and run by a strong team".

Sure, you could stay at a high-rise hotel smack on Palm Beach. But wouldn’t you rather bed down somewhere that offered an authentic taste of Aruba? Run by twin sisters, Boardwalk does just that with 14 spacious colorfully decorated casitas set on a former coconut plantation that’s near Fishermans Huts beach (and a quick walk to the marquee strand at Palm). Read article here.

Never mind that it’s not on the beach; this cozy 14-casita compound set on a former coconut plantation is popular with visitors seeking an authentic taste of the island enthusiastically delivered by the sisters who own it. And since its near Fisherman’s Huts beach (and a quick walk to the marquee strand at Palm), sand seekers can still get their fix.

If your idea of an island vacay involves retreating to a colorful casita on a former coconut plantation, this Palm Beach 14-roomer will fit the bill. And since prices start at around $180 a night, the bill will fit your budget, too.

"WHERE TO STAY: The Ritz-Carlton, Aruba’s newest luxury hotel, offers gorgeous views of the Caribbean Sea from each of its 320 rooms. Guests can take advantage of the 15,000-square-foot spa, two pools, four restaurants and a casino. Across the street, the Boardwalk Small Hotel Aruba provides a more intimate atmosphere, with 14 independent casitas with full kitchens and patios". Read full article here.

The boutique hotel did not go unnoticed by local and international press. VOGUE Netherlands December issue described Boardwalk Hotel Aruba as follows: " The Belgian- Aruban twins Kimberly and Stephanie welcome you in this stylish complex of 14 colorfully decorated casitas. It's rooms feel spacious because of the high ceilings and each cottage has one. private terrace . There is a small pool and whirlpool. Boardwalk is not directly on the ocean, but you are welcome to use the lounge chairs on the beach at Moomba beach Bar. With its lush green garden, the eco-friendly boardwalk is the place to dream away in a hammock with a book; the ultimate island feeling".

5 Ways to Experience Aruba - How to get down to earth on this Dutch island.

Aruban-born, Belgian-raised twin sisters Kimberly and Stephanie Rooijakkers took over this 200-year-old coconut plantation turned boutique hotel four years ago, adding a touch of bohemian yet clean-lined chic to the lush landscape – think bright white Duravit fixtures, hot-pink accent walls and glass terrariums. The 14 quiet casitas (20 more are in the works) are perfect for couples wanting to avoid cruise-ship crowds and high-rise hotels. The sisters are also a great resource for hidden gems: Each room has a wooden “treasure box” full of local experiences and businesses recommended (and tested) by them, including secluded scuba-diving spots and chefs who will cook right at guests’ casitas." 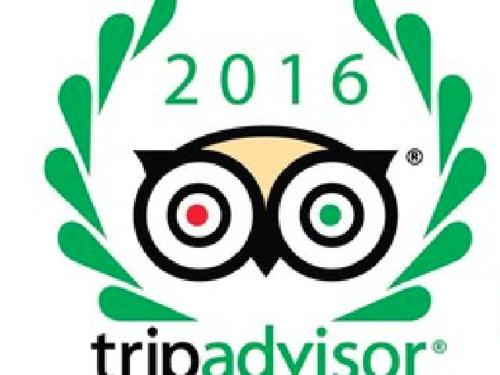 Boardwalk Small Hotel Aruba is proud to announce that over the years it has consistently received the TripAdvisor Certificate of Excellence Award. It shows that we’re one of the top 10% of all businesses on TripAdvisor based on guest reviews. Year over year Boardwalk Small Hotel's guests have ranked our small hotel as the best boutique hotel in Aruba.

Boardwalk's hotel team could not have reached this high ranking without you and is extremely grateful to all of the Boardwalk Small Hotel guests for taking the time to review us and for the positive comments and feedback, naming us 'Best Boutique Hotel Aruba'. We look forward to continue giving all of our guests a reason to come (back) to paradise!

Boardwalk Small Hotel Aruba has been ranked #2 in the 2016 Best Boutique Hotels in the Caribbean, Reader’s Choice by Caribbean Journal. Boardwalk Hotel was the ONLY boutique hotel in Aruba that was nominated on their list. Click here